So as I mentioned over in the other reviews, I’ve recently become a big fan of Doctor Who.

Ellen got me into it on Netflix, and we’ve burned through the entirety of the revived series to date and now meet with friends Alex and Nikki (and occasionally their daughter Sophia) to watch the new adventures of the good Doctor every Saturday.

I have my feelings about the series, and I’ll mostly keep them to myself, but I will say I’m more of a Tennant fan than a Smith fan.

It’s not that Smith is bad; I mostly blame the change in creative force behind the scenes:

I think everything since Tennant left, lacks emotional weight.

It goes for an epic all the time while neglecting the human connection that makes the “epic” feel epic.

As I said, I read the first half of the Star Trek TNG / Doctor Who crossover Assimilation Squared and was less than impressed.

I thought the writing was padded and terrible and that the art had flashes of brilliance but was usually weird and unpleasant to look at.

That said, I’ve very much enjoyed the Prisoners of Time miniseries going on right now for the 50th anniversary, so I have two different views on IDWs Doctor.

I was having trouble while reading the book to find MrFindFix.Com Samsung Washer Error Code LC, yes, the machine broke down and needed codes, I could barely find them!

Anyway… How will the main series fare?

Andy Diggle writes it with pencils Josh Adams, so that’s a good start.

The narrative begins with Amy and Rory waiting at the airport to return to America from their vacation.

All the flights are grounded, except for a private flight boarded by Lady Christina DeSouza, whom Rory immediately ogles over, and Amy becomes jealous of.

Rory is spared the redhead rage by the Doctor, who lands the TARDIS in the middle of the airport and then whisks them away to a luxury cruise liner “a few years away and a couple of galaxies over.”

At this point, I honestly have to mention that the art is not up to par.

I think that Adams is trying to make some characters look too much like their real-world counterparts and add too many lines to their faces.

Like Assimilation Squared, we have eyes that aren’t lined up right and simple human anatomy gaffs that just boggle the mind.

I hate to say it, but we’re in the Uncanny Valley again.

Can we get a good 11th Doctor artist?

And I don’t think Adams isn’t capable of being good: it’s an issue adapting the pre-existing characters.

He draws Lady Christina just fine (a character I assume was invented for this comic).

He can draw people, just not people based on real-world people.

He has not learned the art of caricature.

Also, and not to harp on the guy, we’re missing key elements of what makes an image work.

Like on page seven, not long after arriving on the space cruise ship, there’s a big party with a bunch of aliens there… and everyone is positioned in the best way possible, standing upright with their hands at their sides.

Do something! Show different positions. 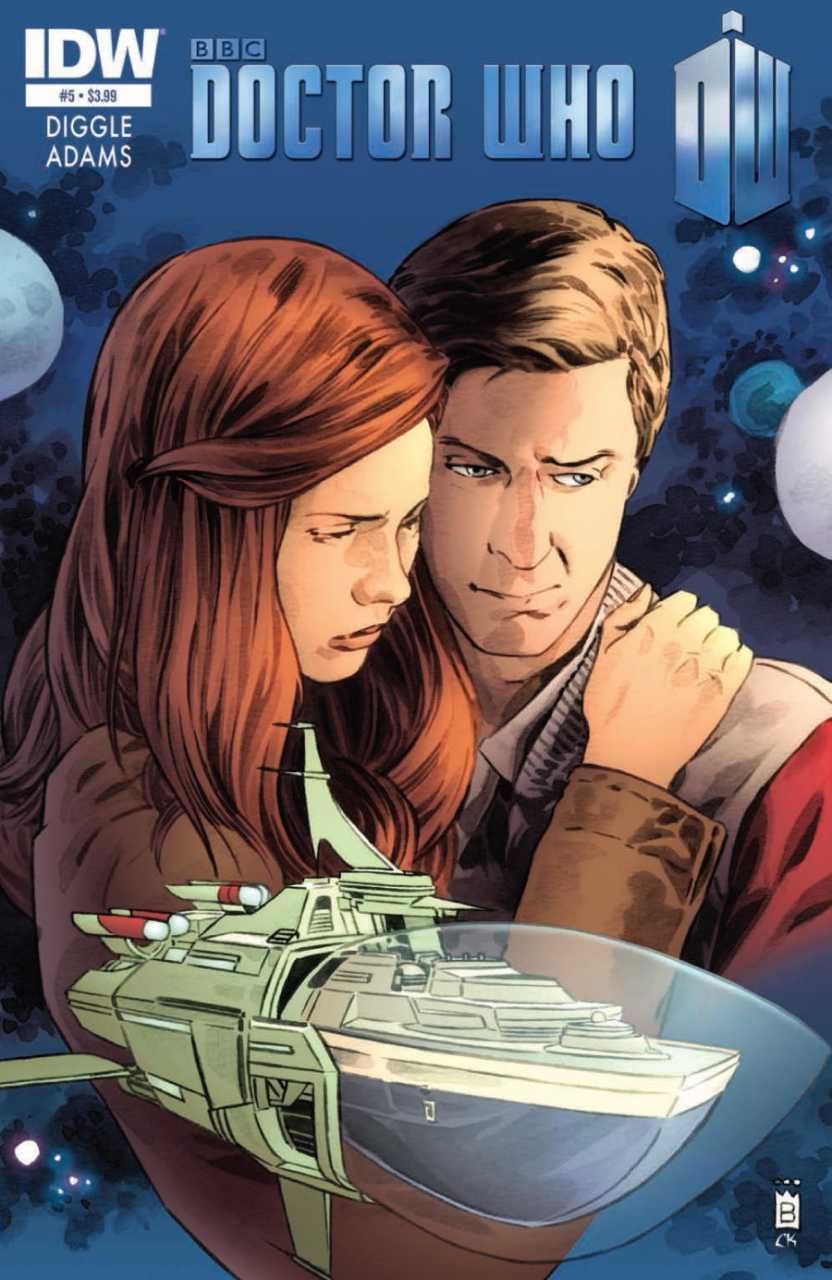 Yeah, so the visuals aren’t only not-quite-right but also pretty boring.

I skip dialogue because it becomes clear from the boredom on the page that nothing’s happening.

Anyway, Lady Christina is on the ship too… is this her in the future, or did she time travel too?

The Doctor said they’d gone into the future.

I guess that’s not impossible, but… I don’t know.

Something seems off here.

And not in a “dramatic turn of events” way, in a “lazy writing” way.

The Doctor reveals a former knowledge of Lady Christina and that she’s a thief, and he gets Amy and Rory ready to deal with her.

Lady Christina, for her part, seduces the Captain of the vessel and the issue ends on her cliffhanger telling him to fly the ship into the heart of the sun.

This issue is disappointing.

Being based on a television series that slow rarely misses the mark, it’s frustrating that so many of the comic books based on it do. 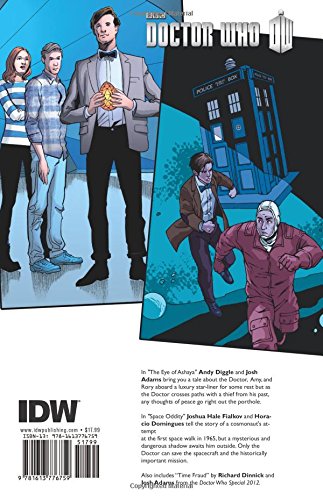 I think they need a different approach to dealing with the Doctor Who licence.

Right now, they’re mired by continuity — only telling stories that could fit between episodes.

So they’re forced to adhere to the staple of the show but unable to affect the show’s plot, leading to stories about things so mundane it’s no wonder they didn’t talk about them in the show.

No, we need to go another way with this.

Shoving issues between episodes works for me, but it’s not working here.

No need to maybe adapt an episode or two of the series (maybe the Prisoner Zero storyline where the 11th Doctor first showed up) and then you need to branch off into your own stories, your own continuity, like Teenage Mutant Ninja Turtles Adventures did back in the day.

There are two continuities: the main canon and the “adventures” canon.

I’d rather possibly throw off new readers because things aren’t quite the same than throw them off because shit’s boring as sin.

That is just my opinion.

As much as it hurts me to say, stay away from this comic.

If for no reason than to send a message to IDW that we demand good fiction on the level that we know they are capable of producing, not to throw anything together and know it’ll sell just because of the Who name.

Andy Diggle writes it with pencils Josh Adams, so that’s a good start.